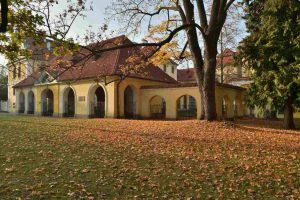 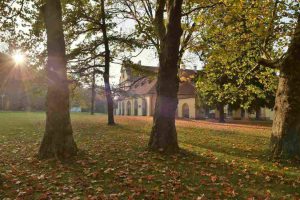 As evidenced by the Zbraslav Chronicle of Petr Žitavský from the beginning of the 14th century, the original Cistercian monastery of Zbraslav was built at the end of the 13th century (provisionally in 1292, the founding document dates back to 1304) on the site of an unfinished royal hunting lodge (with the chapel of St. Jakub) by Přemysl Otakar II. (1268).
Zbraslav, glorified by King Přemysl Otakar II. and his son Wenceslas II. (where they both enjoyed their stay as an ideal hunting spot) was chosen as the place for founding a monastery. Abbot Konrád became the first abbot of the monastery (with the Latin name &quot;Aula Regia&quot;), the monks were introduced here on April 20, 1292. A village and gradually a town were established around the monastery. The building was completed in 1333 and at the beginning of the 15th century it functioned as a hospital with a chapel. The monastery was eventually burned down by the Hussites in 1420 (and by a Prague mob led by the priest Koradna; including looting and desecration of the corpse of Wenceslas IV, etc., the monastery buildings were almost entirely burned down), but was gradually repaired in the 15th and especially in the second half of the 16th century. At the beginning of the re-Catholicization, the archbishop&#39;s censor Antoin II. Plamming, who was called in from France,became the abbot of Zbraslav (from 1586 to 1609). During its glory days, several renaissance additions and extensions of the abbey and St. Jakob church were implemented. However, a new wave of destructions took place: Passau troops repeatedly looted the monastery in 1611 and 1612, there was also an invasion of the Mercenary Troops of Emperor Matthias. The restoration of the monastery eventually took place under the abbot George I of Vrat. In 1622 the monastery received confiscated estates, mainly Komořany.

The construction of the new convent of the Zbraslav monastery happened during the existence of outstanding personalities, such as the local abbots Wolfgang Lochner and Tomáš Budecius. It is documented in 1705 that the architect Jan Blažej Santini-Aichel worked here, according to whose project the next stage of the monastery construction took place. During the wars for the Austrian heritage, Empress Maria Theresa forced considerable loans on Czech monasteries, which were never repaid, and brought the monasteries into bad financial conditions. Although it was not possible to count on the construction of a large monastery church, the Gothic church received a new Baroque decoration and equipment. As a result of the Josephine reforms in 1785, the Zbraslav monastery was abolished. The monastery property became part of the state administration, which soon sold the convent building to a Belgian businessman, Joseph de Souvaigne, the founder of the local sugar factory (according to a project by chamber builders A. Hummel and Ign. Palliardi, the author of rebuilding part of Prague Castle facades). While the convent was purposefully used and damaged, in 1825 the prelature transformed into a chateau and became the property of the Oettingen-Wallerstein princely family, which in 1875 also bought the convent building (but the sugar factory and the chemical factory were still in place).

Modern history of the castle

It was not until 1910 that a new transformation of the castle came to light – Cyrill Bartoň of Dobenín (who was then knighted) bought the Zbraslav estate and proceeded with the reconstruction and new modifications not only of the original prelature, but also of the convent. In the years 1912 to 1925, the building was restored according to the design of A. Čenský and O. Nyppl. From 1939, on the basis of a contract, the use of the convention was provided to the National Gallery in Prague. In 1948, the castle building and state equipment were seized by the state. In later years, the building, together with the artistic inventory, was used primarily for the representational purposes of various ministries. The chateau was returned to the Bartons of Dobenín in restitution and part of the space is currently used as a depository of the Náprstek Museum of Asian, African and American Cultures. Selected spaces can be also hired for special events – see section Venue Hire.